Info on the Textbook Provided 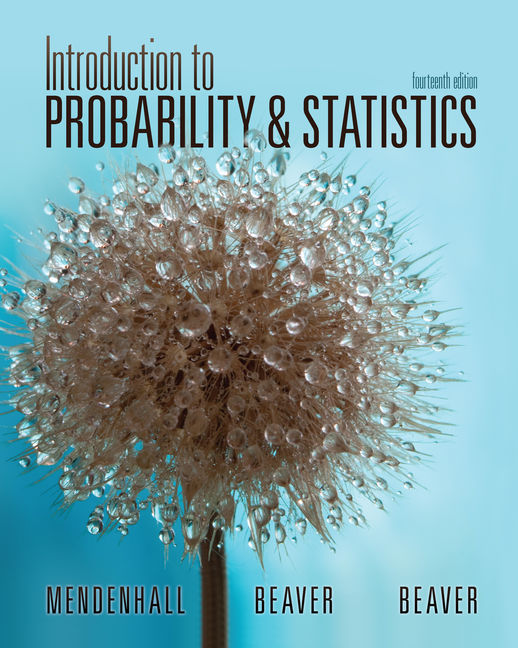 Overview of the Textbook:

Used by hundreds of thousands of students since its first edition, INTRODUCTION TO PROBABILITY AND STATISTICS, Fourteenth Edition, continues to blend the best of its proven, error-free coverage with new innovations. Written for the higher end of the traditional introductory statistics market, the book takes advantage of modern technology–including computational software and interactive visual tools–to facilitate statistical reasoning as well as the interpretation of statistical results. In addition to showing how to apply statistical procedures, the authors explain how to describe real sets of data meaningfully, what the statistical tests mean in terms of their practical applications, how to evaluate the validity of the assumptions behind statistical tests, and what to do when statistical assumptions have been violated. The new edition retains the statistical integrity, examples, exercises, and exposition that have made this text a market leader–and builds upon this tradition of excellence with new technology integration.

Features of the Textbook:

Introduction: What Is Statistics?

Many sets of measurements are samples selected from larger populations. Other sets constitute the entire population, as in a national consensus. In this chapter, you will learn what a variable is, how to classify variables into several types, and how measurements or data are generated. You will then learn how to use graphs to describe data sets.

Graphs  are extremely useful for the visual description of a data set. However, they are not always the best tool when you want to make inferences about a population from the information contained in a sample.  For this purpose, it is better to use numerical measures to construct a mental picture of the data.

Sometimes the data that are collected consist of observations for two variables on the same experimental unit.  Special techniques that can be used in describing these variables will help you identify possible relationships between them.

Now that you have learned to describe a data set, how can you use sample data to draw conclusions about the sampled populations? The technique involves a statistical tool called probability. To use this tool correctly, you must first understand  how it works.  The first part of this chapter will present the basic concepts with simple examples.

In the past several chapters, we studied population and the parameters that describe them.  These populations were either discrete or continuous, and we use probability as a tool for determining how likely certain sample outcomes might be.  In this chapter, our focus changes as we begin to study samples and the statistics that describe them.  These sample statistics are used to make inferences about the corresponding population parameters.  This chapter involves sampling and sampling distributions, which describe the behaviors of sample statistics in repeated sampling.

In this chapter, the concept of a statistical test of hypothesis is formally introduced. The sampling distributions of statistics presented in Chapter 7 and 8 are used to construct large sample tests concerning the values of population parameters of interest to the experimenter.

The basic concept of large-sample statistical estimation and hypothesis testing for practical situations involving population means and proportions were introduced in Chapter 8 and 9.  Because all these techniques rely on the Central Limit Theorem to justify the normality of the estimators and test statistics, they apply only when the samples are large.  This chapter supplements the large sample techniques by presenting small-sample tests and confidence intervals for population means and variances.  Unlike the large-sample counterparts, these small-sample techniques requires the sampled population to be normal, or approximately so.

11 The Analysis of Variance.

The quantity of information contained in a sample is affected by various factors the experimenter may or may not be able to control.This chapter introduces three different experimental designs, two of which are direct extensions of the unpaired and paired designs of Chapter 10. A new technique called the analysis of variance is used to determine how the different experimental factors affect the average response.

In this chapter, we consider the situation in which the mean value of a random variable y is related to another variable x.  By measuring both y and x for each experimental unit, thereby generating bivariate data, you can use the information provided by x to estimate the average value of y and to predict values of y for preassigned values of x.

In this chapter, we extend the concepts of linear regression and correlation to a situation where the average value of a random variable y is related to several independent variables – x1, x2, …, xk – in model that are more flexible than the straight line model of Chapter 12.   With multiple regression analysis, we can use the information provided by the independent variables to fit various types of models to the sample data, to evaluate the usefulness of these models, and finally to estimate the average value of y or predict the actual value of y for given values of x1, x2,…, xk.

Many types of surveys and experiments result in qualitative rather than quantitative response variables, so that the response can be classified but not quantified.  Data from these experiments consist of the count or number of observations that fall into each of the response categories included in the experiment.  In this chapter, we are concerned with methods for analyzing categorical data.

Go Back to Info on Statistics ePrep Course